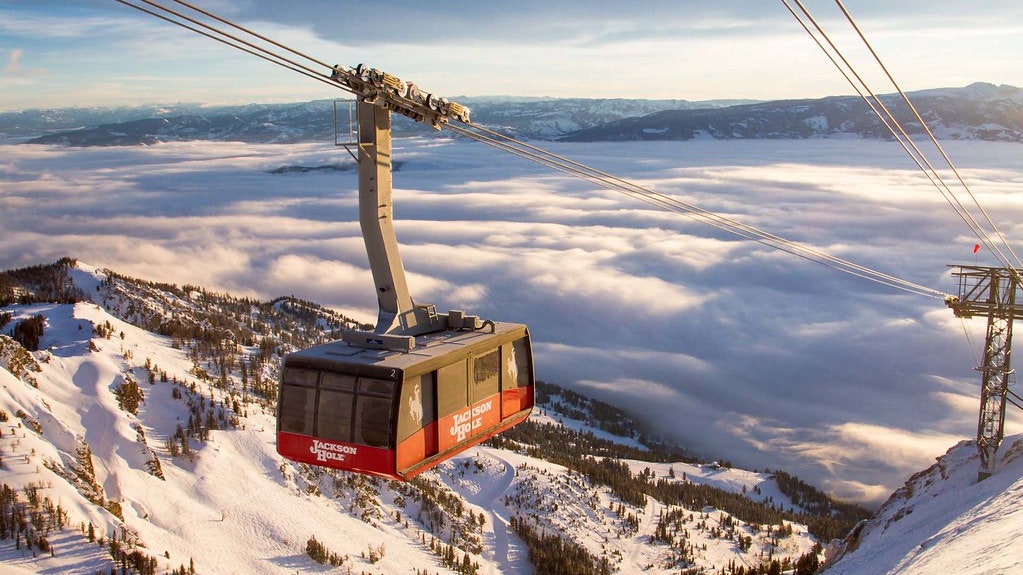 Where to Eat, Stay, and Play in Jackson Hole

Jackson Hole, with its wide open spaces, surrounded on all sides by ruggedly beautiful mountains, is the kind of place people visit once and never leave. It attracts resort skiers and adventurous outdoor enthusiasts alike, and in recent years has gained a reputation for its small but mighty dining scene. All of which gives it an outsized place in the mind of travelers. More than 2.6 million people visit Jackson Hole each year; the entire state of Wyoming has a population under 600,000.

Yes, it’s a gateway to the National Parks. Yes, it’s a winter wonderland for skiers. It's also an idyllic paradise year-round. In the past few years, boutique hotels have popped up alongside creative restaurant concepts, prompting travelers to stay a little longer, exploring historic Town Square and beyond. Here is our guide to what to do in Jackson Hole.

Getting to and around Jackson Hole

Jackson Hole Airport is small and picturesque, with direct flights from more than a dozen American cities, including New York (LaGuardia), Houston, Seattle, and Los Angeles. Flights are more frequent in winter and summer months. Once you’re on the ground you can use Uber as well as several taxi services, but plan on renting a car at the airport if you can. Jackson Hole is spread out and you’ll want the flexibility to explore neighboring towns and parks on your own schedule. Start Bus is an affordable option to hop from the town of Jackson to Teton Village to ski or have a drink. In summer, Start Bike, a fleet of smart bikes (with heads-up displays and integrated lighting for nighttime rides) available for ride share, is a fun way to scoot around town and can help avoid traffic.

Best Things to Do in Jackson Hole

Jackson Hole is known for its world-class skiing, so a day skiing or snowboarding at Jackson Hole Mountain Resort is a must. The mountain features 13 lifts with 2,500 acres of in-bound terrain and 4,139 vertical feet from the base to the top of Rendezvous Mountain—making it the longest, continuous vertical rise of any ski resort in the U.S. If you’re that person on the trip who isn’t a skier, take a scenic ride to the top of Bridger Gondola for 360-degree views of Teton Valleym and enjoy a drink at Piste Mountain Bistro (the gondola ride is free with a reservation to Piste).

See wildlife in its element with JH EcoTour Adventures. The company offers single-day and multi-day treks through Yellowstone and Grand Teton National Park all year long, offering a glimpse into the great outdoors with the help of skilled guides. Depending on the season, expect to see wolves, elk, bison, bears, and foxes. You also can explore on your own with a visit to Grand Teton National Park ($35 for a day pass) if you don’t have the time for a more scheduled deep dive into the wild.

In summer, a hike up Wildflower Trail or Corbit’s Cabin is a solid workout that comes with awe-inspiring valley views once at top. You can take the gondola back down or continue the adventure at the Via Ferrata (starting at $335 for 2 people), a sort of clipped-in version of mountain climbing that can be done by kids as young 11. Mountain biking has gained popularity in the area, too. Two new trails, accessed via the Sweetwater Gondola, will open summer 2021.

The town of Jackson is filled with galleries and shops, so clear an afternoon for a self-guided art walk to Altamira, Deihl Gallery, Tayloe Piggott Gallery (don’t miss Tuck Fauntleroy’s large-scale, aerial photographs of the American West here), and Horizon Fine Art Gallery before picking up a souvenir to take home. John Frechette and Christian Burch’s MADE (American made gifts and tchotchkes) and Mountain Dandy (a mix of vintage and handmade items) could fill a second suitcase. Womenfolk boasts a collection of curated pieces of vintage designer clothing from around Jackson Hole. Knives from New West KnifeWorks are world-class blades and true showpieces, and Alpyn Beauty from Belle Cose is a sustainable skincare line crafted with ingredients grown in the nearby mountains.

Two decades ago, Jackson Hole’s food offerings were minimal. Then Gavin Fine, restaurateur and owner of Fine Dining Restaurant Group, opened Rendezvous Bistro in 2001. From there, the scene exploded with a personality of its own, filled with way more than the steakhouses and western-themed bars you might expect to populate this part of the world.

For breakfast, lines start early at Persephone Bakery, where husband-and-wife team Ali and Kevin Cohane master making artisanal pastries and bread at altitude (things don’t bake quite the same way at higher elevations), alongside seasonal lattes. They have locations in town and on the West Bank of the Snake River, in Wilson.

For lunch, Bin 22, will suffice for a glass of Urlari Pervale (Mary Kate Buckley, president of Jackson Hole Mountain Resort is a co-founder of the Tuscan winery) and several small plates. The wine bar also serves as an impressive bottle shop, with locally made snacks to-go. Local is a popular place for lunch, specifically for the Local burger, and Old Yellowstone Garage in Teton Village provides gorgeous views alongside its stone-fired pizza and house made pasta.

Snake River Grill (“The Grill”) has been a beloved dinner spot by locals for more than 25 years, so if you’re planning on stopping in, make your reservation in advance. Don’t let the rustic, old school vibe make you think this is just some steakhouse; the steak tartare pizza and a drink from the brief-but-excellent cocktail menu will stay with you. Coelette, a newcomer to the scene, in historic Coe Cabin, brings regional farm-to-table cuisine to the mix. For a more casual dinner in the village, Teton Thai presents authentic Thai food and inventive cocktails. Grab a nightcap at Glorietta, where the team from internationally renowned Death & Co. developed the menu.

In Jackson, Conde Nast Traveler Hot List pick the Anvil Hotel (from $165 a night) is a renovated mid-century motel, but much cozier, down to the in-room Woolrich blankets. It’s also walking distance to the town’s main attractions and home to the aforementioned Glorietta. Hotel Jackson (from $499 a night), also in the heart of town, is a modern boutique option with a decidedly Western aesthetic, though it's also a draw for its mediterranean restaurant, FIGS. Four Seasons Resort Jackson Hole (from $943 a night), nestled at the base of Jackson Hole Mountain Resort in Teton Village, is the only ski-in/ski-out hotel in the village, and comes with unobstructed views of the Tetons, full-service alpine spa, an outdoor pool and jacuzzi (open year-round), ski concierge, and all the pampering you’d expect. Continuum (from $340 a night), the first hotel from action sports filmmakers, guides, and gurus Teton Gravity Research, is a more affordable option in the village, and caters to the discerning adventure enthusiast.